Going into week 38 of growing a human 🕊
My little cheeky chops 🤍
Happy 3rd birthday to my darling Freddie, you’re an angel sent from above. We love you SO much 🤍
𝙵𝚞𝚕𝚕-𝚝𝚎𝚛𝚖 𝚋𝚊𝚋𝚢! 🥳
If you’ve seen my stories, then you’ll know that we’ve had quite a rough week. You’ll know, if you’ve been here a while; that Freddie suffers with his chest (more so in winter months) so him being poorly often, isn’t new to us. Wednesday night we went to the doctors after Freddie had 2 days of non-stop coughing, sick, sleepy, raging temps, crying non-stop and not drinking/eating etc.
Just over 4 weeks left of you growing inside of me, time has gone soooo fast but has now slowed down and we’re eagerly awaiting your arrival 🌟
Posted on 31st Dec 201818th Jan 2019 by I'm more than just a mum..

A very belated Merry Christmas to everybody! 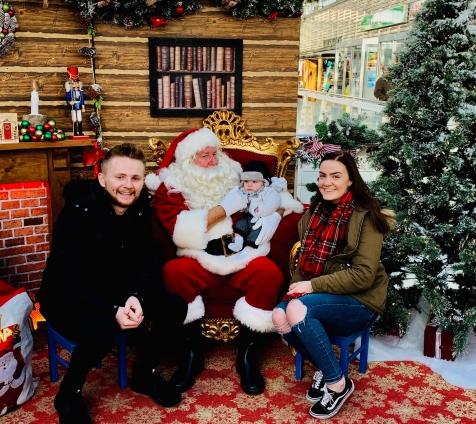 We’ve had such a magical and special, festive period this year! Christmas for us was really the icing on the cake to end and celebrate such a wonderful year for us! This year has been the best year of our lives and it was so lovely to sit back and reflect on it, all whilst being together on Christmas, with our gorgeous little boy. Not only was it Freddie’s first Christmas and being a family of 3, it was also mine & Ryan’s first Christmas together in 3 years. Last year he was really ill meaning we couldn’t be together and the year before; we weren’t together so this year just felt so special! This year I truly learnt the definition of “presence, not presents”! Until you have children, you never realise how special Christmas is and can be, it definitely is about who’s around you rather than what you’re given and although Freddie is at the age where he didn’t understand any of what was going on, he was amazed at all the wrapping paper and his toys. 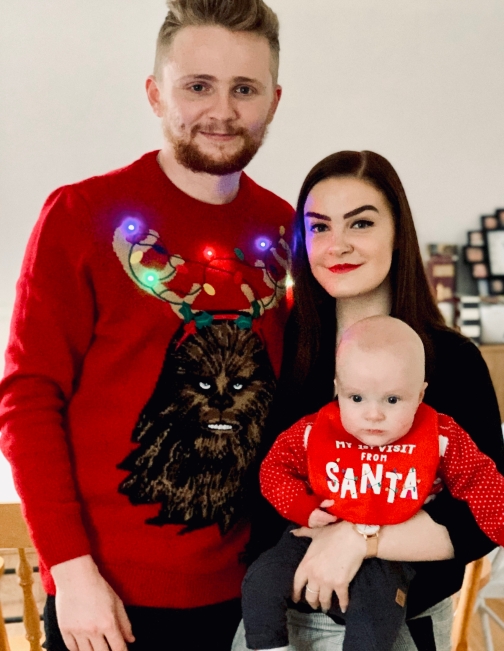 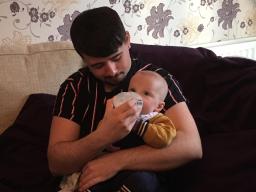 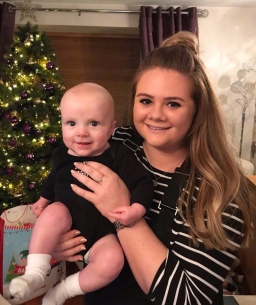 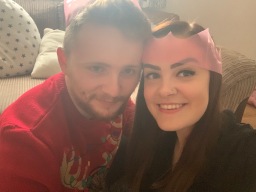 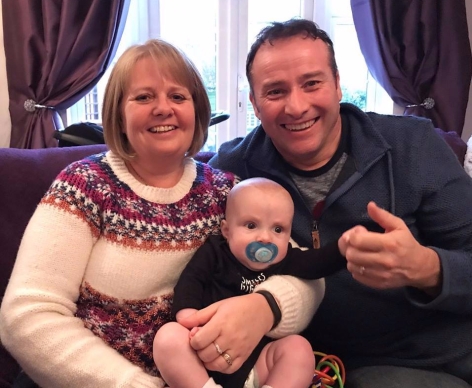 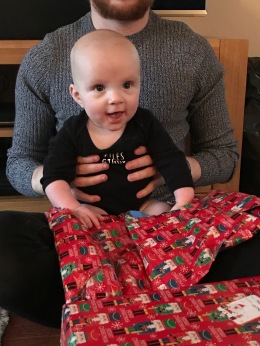 We had so much fun reconnecting, catching up and spending time with those we love and care about and Freddie is so lucky to have so many people who love him as much as we do! He was spoilt rotten and not just with presents, but with love. He definitely has enjoyed lapping up all the kisses, cuddles and playing! We love dogs and one day, are keen to have our own and Freddie seems to love Ryan’s family dog, although she’s very unsure of him!

Freddie was absolutely spoilt rotten, I genuinely can’t get over how much he was given and how I’ve actually managed to store it all (although some stuff has had go to his grandparents!) He got some really lovely and thoughtful things and stuff that’s going to come in so handy – including a baby walker, learning play table, puzzles, interactive toys and HEAPS more!! Freddie spent most of Christmas Day crying and not wanting to be put down, he was very overwhelmed by everything, all the people, noise, big toys and things around him and in his face. The best thing for him was probably the food. Freddie LOVES  food and doesn’t stop but I’m so glad he’s taken to food so well. He had his first little try of chocolate and he tried a Brussel Sprout, which I didn’t think he was going to like but he ate the lot! As well as Freddie eating lots of food, we all did too! I have never seen Ryan eat so much food, ever. Come Christmas night, I couldn’t move, but did I stop eating? Nope. Bring on a big diet and healthier eating come Janaury! 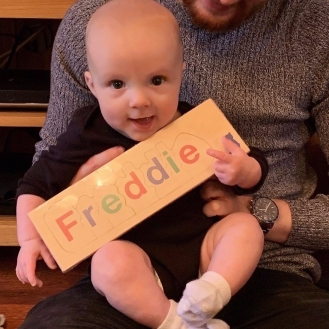 Being unsettled Christmas Day, meant Freddie wouldn’t settle for anyone but me, so I didn’t really get much time to myself or with anyone else, but it’s a moment I’ll treasure; him just needing his mama! He napped most of the day and he’s teething horrendously at the moment, and typically Christmas Day was the worst day for his teeth – we were hoping to wake up to a tooth on Christmas morning; but sadly we didn’t!

Although no development in teeth, Freddie has hit some HUGE developments that we’re so pleased about over Christmas and were so proud of him for. As I’ve mentioned in previous posts, I’ve been a little worried about him for not hitting developments when expected and have been hoping he’d start hitting them soon and that he has! The first milestone development he’s hit is ROLLING OVER! He’s been trying so hard for ages to get to his belly, but was getting his arm stuck and then as we were sat playing monopoly.. he did it & scared himself in the process. I don’t think himself, he was expecting to do it and he cried instantly and then refused to do it again for a few days! He’s only done it twice since but I’m so glad he’s done it! 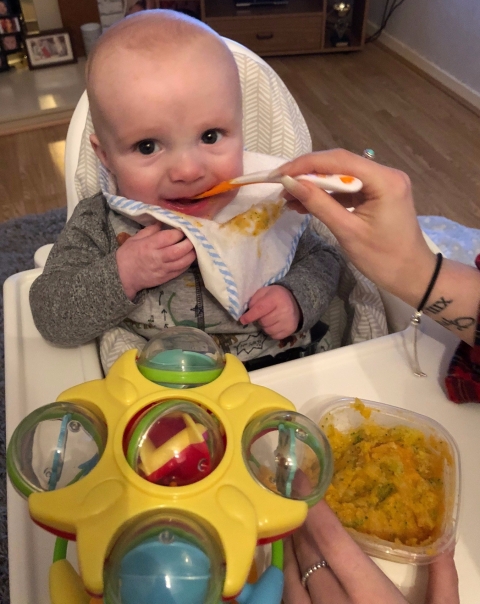 He’s finally become happy to sit in his high chair, he has point blank refused up until now, but he’s loving having his foods in there and being able to look around properly! He just looks like a proper big boy – *SOBS*! He’s also doing so well with sitting up with support, he’s constantly lying down, led on me or stood with us holding him, but he’s slowly learning that his body will also allow him to sit!

We were given a jumperoo for Freddie, way before he was even born and Christmas Eve, we decided to trial it out… he was a bit small, but he sure loved it!

He loved having a bounce, hitting the toys and watching all the colours and everything move. As you can see from the photo’s, his cheeky smile says it all. 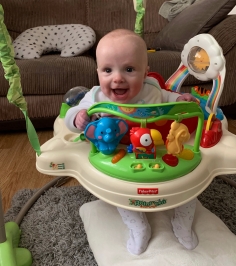 He stayed in it for ages and didn’t want to get out and has now become one of his favourite things to keep him entertained.

Christmas for the past 5 years has been a difficult time for me, as a couple weeks prior to it, I lost my dad and we had his funeral the day before Christmas Eve. I always push it to the back of my mind and not let it bother me as much as I can, but this year; I couldn’t. Since having Freddie, I seem to be finding it harder that my dad isn’t around. Christmas morning whilst Freddie was on me, having a nap… a white feather flew down past the window. In that moment, my heart broke. I looked down at Freddie and just cried,

I wish he was here to see Freddie grow and his first Christmas and for every other thing in his life. Freddie will sure grow up knowing who he was, so as soon as he’s old enough to start understanding, I’ll be telling him all about him.

As New Year comes in, I take the time to sit and reflect on what a fantastic year 2018 has been. 2018 has bought me so much that I am so thankful and grateful for, this year I have been truly blessed and been given everything I’ve always dreamt of and more. It has bought me the most gorgeous, healthy little boy, a stable and happy relationship, a family of my own as well as a new family on Ryan’s side. Friendships strengthening and gaining new friends, no deterioration in my mental health, growth mentally and emotionally, confidence, a new business venture, mat’ leave to watch our baby grow, my 21st, setting up this blog and watching it develop, so many memories made and so much more… but the best thing to have happened this year… true and complete HAPPINESS!

Whilst most people are out celebrating and seeing the New Year in by getting drunk, me and Ryan are in bed watching films and eating. So, from my family to everybody out there.. A massive thank you for all the support in my business, the support with my blog and the love we’ve received in sharing our journey as young parents..

Happy New Year and may 2019 bring you nothing but good times, good vibes, new memories, love and happiness. See you next year!

Published by I'm more than just a mum..

Welcome to my blog and thank you for visiting. I'm Chloe, I'm 22 and a first time-winging it mum to Freddie! Here, I hope to share my views and experiences on being a mum and to share some light into what it's really like. View all posts by I'm more than just a mum..